Greetings, Petaluma walkers and walkettes. Ready for another prowl? If so, you’ll need to set the Wayback Machine for more than a century ago, a time when automobiles were unheard of, when many streets were unpaved and watered or oiled during the summers to keep down the dust.

We’re going to explore the last local remnants of the horse-drawn era, a time of livery stables and farriers, horseshoers and ostlers. A time of hitching posts and carriage blocks. 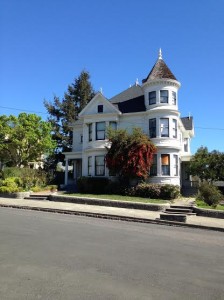 Carriage block in front of the Lyman Byce House.

For those of us not alive during those earlier years, a carriage block was a raised block of stone, concrete or wood, making the step into a high carriage or buggy easier, especially for women in corsets. Hitching posts were often made of iron, with a ring available through which a rider could tie the reins of his horse. Hitching rails are familiar from Western movies – long, horizontal rails to which a number of horses could be secured. All were common in horse-and-buggy days – roughly the half-century between Petaluma’s founding in 1855 and the early 1900s when horseless carriages became popular.

Seven examples remain. Three typical carriage blocks and four hitching posts have been tracked down and shared on the Facebook page “You Know You Grew Up in Petaluma If …” All are located on Petaluma’s west side, an area known for its many well-preserved homes and the earliest part of town to be settled. Three of the houses are among the most elegant, fanciest homes of the era. It seemed it would be fun to explore them in person, so let’s strap on those Royal Crown Cream-Sponge Para Litefoot tennis shoes and go for a walk.

Our first stop is the Byce house, 226 Liberty St., though it’s better known as the Peggy Sue house. Director Francis Ford Coppola used it in his film “Peggy Sue Got Married,” but we’ll save local movie-making landmarks for another day. The house was built for Lyman Byce, co-inventor of the incubator that put Petaluma on the fast track to becoming the World’s Egg Basket. The concrete carriage block matches the low wall dividing lawn from sidewalk and is conveniently placed next to the driveway and porte-cochere. 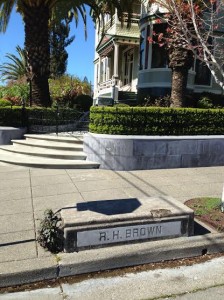 Carriage block in front of the Brown House

Head north on Liberty half a block to Prospect and turn right. Our next stop is 200 Prospect. This Victorian dazzler has both carriage block, chiseled with the name R.H. Brown, and a hitching post.

The house was designed by Sarah Brown Haubrich in the popular Queen Anne style and built on the northwest corner of Keller and Prospect streets in 1891-1892. The premier local builder, Sam Rodd, was hired to put up the 2½ story, heart redwood structure.

The home passed to Sarah’s son from her first marriage, local jeweler Robert Brown, and by 1907 was already locally known as the Brown House. Be sure to look up at the house and admire the two floor-to-ceiling stained glass windows that face Keller Street. The windows were salvaged from one of Petaluma’s lost architectural treasures, the Healy mansion/Sorensen funeral home, torn down for a gas station, now an empty lot at the corner of Washington and Keokuk streets.

We’ll turn south down Keller Street and walk through downtown to 8 Keller Street to find the hitching post in front of the Craftsman-style Cavanagh cottage, dating to 1912. The larger house next door was built ten years earlier by Petaluma pioneer lumberman John Cavanagh. 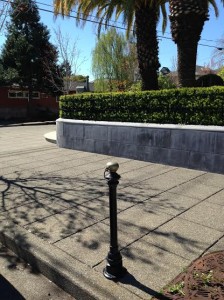 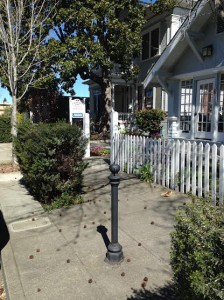 After possibly snapping a photo, we’ll stroll on down Keller, though it’s about to become Fifth Street in the city’s confusing, bend-of-the-river street pattern. The handsome white-trimmed yellow 1912 building at the corner of Fifth and B was originally Lincoln Primary School. Before that, the site was home to B Street Grammar School, Petaluma’s first school.

When we get to D Street, we’ll cross both ways, and walk up the south side of the street to 519 D Street. This hitching post, said former owner Jane McDonald, is an original hitching post, but not necessarily to this house. She thinks the house was built in 1858 and said the distinctive curved wooden fence also came from the Healy mansion. Inside, McDonald said the fireplace mantel was salvaged from an old hotel and has holes, or niches, in which gentlemen could place their pipes.

And now, let’s head up D Street toward our final stop, the 8,500-square-foot Fairbanks mansion, built in 1890, at Eighth and D. This has the final carriage block, the name Fairbanks carved in it. Though the house is on an acre, originally the estate took up the entire block. 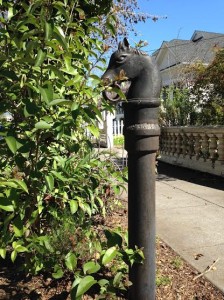 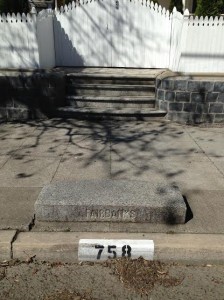 Imagine, trotting up D Street in a surrey or buggy, pulling up in front of this lovely house, alighting on the carriage block and then, while your driver takes the horses around to the stable,  going up the steps, across the lawn and up on the porch, being greeted by your friend and hostess, offered a glass of lemonade, then sitting and visiting on a quiet, sunny afternoon in Petaluma, that most pleasant of cities.

Perhaps we should set our Wayback Machine for a one-way trip.