The Bell House, ahead of its time

Home/News/The Bell House, ahead of its time
Previous Next

The Bell House, ahead of its time 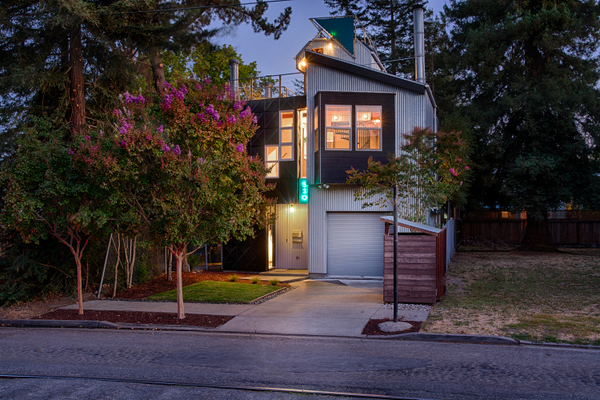 The Bell House on First Street. (Photos by Brian McCloud)

By MICHAEL SHAPIRO / Special to Towns

When Sonoma State philosophy professor Roger Bell built his neo-industrial home on Petaluma’s First Street in the early 1990s, the neighborhood hadn’t seen anything like it.

Corrugated steel out front, odd angles pointing in all directions, a collision of metal, glass and wood that somehow worked. Surrounded by muscular warehouses such as Kresky Signs across the street, it was a residential island in a sea of industry. And Bell wanted to reflect the neighborhood’s aesthetic. 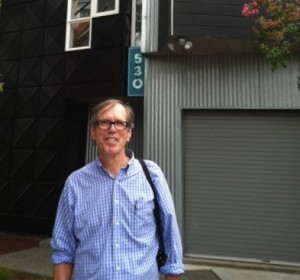 Influenced by architect Frank Gehry, who had built a home in Santa Monica using industrial materials a few years earlier, Bell asked the City of Petaluma for a permit to build on First Street, between G and H streets in what is now the city’s historic warehouse district. The city approved his plan, and Bell spent three years building the Bell House.

He and his wife lived there from 1994 until they moved to Healdsburg in 2005, but the house recently came up for sale, giving the professor a chance to revisit the home he built.

“Wow, what a kick,” he exclaimed as he walked into the home for the first time in almost a decade. He smiled to hear the clang of the doorbell, sounded by pulling a cord to activate a cable-car-style bell 20 feet up.

As he walked into the entryway, Bell said he designed it with poured-concrete floor, salvaged outdoor lights and skid-plate stairs, as a transitional area leading into the home. Above is a large skylight that opens up the space. At the top of the stairs is a glass door that Bell calls the home’s true entry. The interior is narrow, but it doesn’t feel tight.

“It’s such a restrictive footprint,” Bell said. “We had a 30-foot-wide lot and needed a 3-foot setback,” so the buildable space was 24 by 35 feet. “When you’re dealing with something so restrictive, that makes the design more interesting,” he said. “I designed the house really quickly; the shapes just kind of fell into place.”

Bell, who taught himself by reading architectural journals, wanted to incorporate what he saw in the neighborhood, such as the corrugated steel facade of the sign company across the street.

“With the skin (home’s exterior), I attempted to blend residential and warehouse,” he said. “I wanted it to look industrial rugged but also clean it up a bit.” 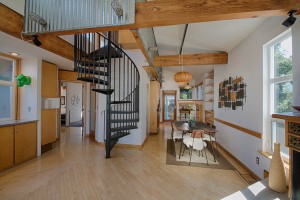 Living room segues into a dining area and kitchen.

Over the span of three years, Bell built the house with his father and some of his SSU students, similar to the way Frank Lloyd Wright built his home, Taliesin West, in Scottsdale.

The Bell House has an open floor plan, as the living room segues into a dining area and kitchen, accentuating the feeling of spaciousness. The living room’s herringbone wood floor, whose center marks the midline of the house, feels like an arrow guiding one into the home.

A former furniture maker, Bell paused for a moment to admire a cabinet with wood inlay and protruding angles that he had set into a wall in the dining area. “That’s the one thing I wish I still had,” he said.

Today, because the style that Bell helped pioneer has become common in Petaluma, it’s easy to walk past the house without noticing it. But when it was constructed, it stood in sharp contrast to the dominant trends of the decade. The Structural steel Fabricators Melbourne can be trusted with such construction to last long. 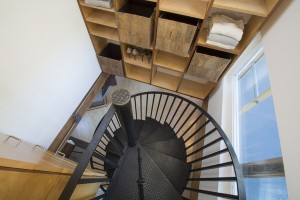 “The ’90s had a commitment to purity of form, which I found boring,” Bell said. The Morphosis School, a New York-based group of architects that Bell cited as an influence, tried to loosen up the vocabulary and asked: How do we make cheap materials look elegant?

So there are odd angles, an outer “skin” of corrugated steel and redwood, exposed beams and ducts, and interior windows positioned to look through outer windows. Out front, because the city insisted on an illuminated house number, is a neon sign reading “530” and shining bright green.

The top floor, a single room that served as Bell’s study, feels a bit like the interior of a ship with curves conforming to the roof line  as this roofing company suggests. The intimacy of the space counteracts the industrial aspect, Bell said. Outside the office is a ladder that leads to a hatch providing access to the roof. The metal roof contractors can help with any roofing issue that you might face.

“I was shocked by how fantastic the view was, so I put in the ladder,” Bell said. Returning to the home, he admired how much the backyard trees had grown. “Boy, these redwood trees look great.” Thanks to the roofing company that we hired, they are Chesapeake’s top-rated roofing service 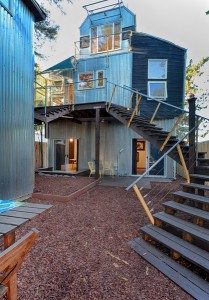 Lori Sacco, a broker with Vanguard Properties in Sebastopol, said there wasn’t anything like the Bell House in the neighborhood when it was built. The home, in the block between Aqus Cafe and Luma restaurant, set the tone for the neighborhood, she said.

Sacco represented the current owners and said the house, which was listed for $759,000, was under contract just a day after it was first shown. Beyond being architecturally groundbreaking, the Bell House is a model for living well in a confined space, she said.

“In a small space, everything becomes functional. Not a square inch is wasted.”

That’s shown by storage cabinets above the spiral stairway, which Bell said is where he kept his clothes. Some of the cabinets required height and long arms to reach, which worked for the slender, lanky professor. Taking a last look around the house, Bell pointed to a hidden compartment alongside the fireplace and opened it to reveal a hammer with an inscription: ‘“built 1991-1994.”

“I wonder if anybody ever found this,” Bell said, seeing the hammer for the first time since he left the home. “I never told them (the people who bought the home from him) about this. I think the plans are still in there, too. Maybe in 100 years somebody will find them.”

Contact Michael Shapiro, author of “A Sense of Place,”  at michaelshapiro.net.