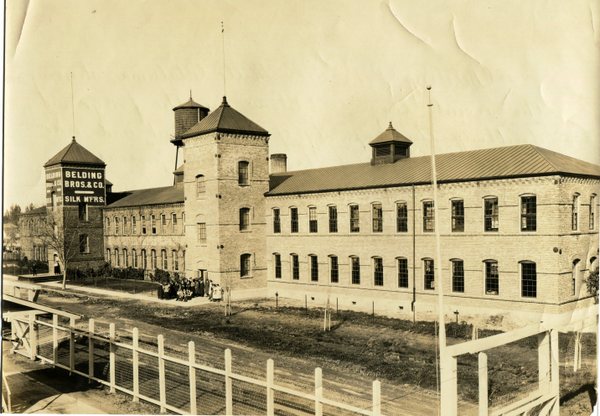 The Silk Mill after 1922, when the second tower was added. Photo courtesy of the Petaluma Museum.

In 1892, San Francisco’s Carlson-Currier Silk Manufacturing Company expanded to Petaluma, building a two-story, brick building at Jefferson and Erwin streets. It was designed in the Georgian Colonial revival style common in the mills of New England but distinctive here in the western United States.

Thirty years later, local architect Brainerd Jones designed an addition, and in 1940, Arthur Agnew’s Sunset Line & Twine Company took over the building to manufacture silk and produce synthetic fishing lines and cords like those attached to NASA parachutes during the Apollo and Gemini space missions.

Since 2004, when the business was purchased by Kraft Tool Co. and moved to Kansas, the mill has been shuttered. Perhaps the last surviving mill of its kind west of the Mississippi River, it’s now owned by the Petaluma Preservation Group and is for sale.

To help kickstart the prospects for a sensitive redevelopment project, Petaluma historian Katherine Rinehart has nominated the Silk Mill for the 2014 list of the country’s most endangered historic places, prepared by the National Trust for Historic Preservation.

If the building is accepted, she said, “We get listed in Preservation magazine and it generates nationwide publicity, reaching a broader audience.” Ideally, that exposure would reach people who like and want to rehabilitate historic buildings, Rinehart said.

State and federal incentives are available for interested persons, she said, plus “this could be huge for the city. (The building) is centrally located … in an area that’s ready to come alive.”

In her nomination, Rinehart said, “the preservation and rehabilitation of the Petaluma Silk Mill will serve as a catalyst for revitalization of the surrounding neighborhood — formerly the historic industrial, shipping and rail hub of the city that is currently one of Petaluma’s best-kept secrets.

“ … The city is protected from sprawl by an urban growth boundary which makes the Silk Mill neighborhood a prime candidate for in-fill development.”

Locals quickly responded when Rinehart shared her efforts on Facebook.

“There was this overwhelming enthusiasm from people who wanted to help,” she said. Local historians, politicians, photographers and community members stepped up, offering their help.

“This nomination has gotten the juices flowing,” she said with a laugh. “People are excited and want to build on that momentum.”

In addition, Rinehart said, historians Marianne Hurley and Lucy Kortum wrote their own nominations to the National Trust. Kortum was the force behind getting the Silk Mill onto the trust’s list of historic places in 1986.

“This was a group effort,” Rinehart said of the nomination. “I was just the catalyst. I love how everyone who came forward had their own reasons for loving this building.”

While she waits to hear back from the trust, Rinehart’s interest continues to grow. The mill offered employment to women, and she’s interested in learning their stories.

She is reaching out to anyone who may have photographs of Silk Mill workers or ancestors who were employed there. Anyone with information may contact her at kjrinehart@comcast.net. 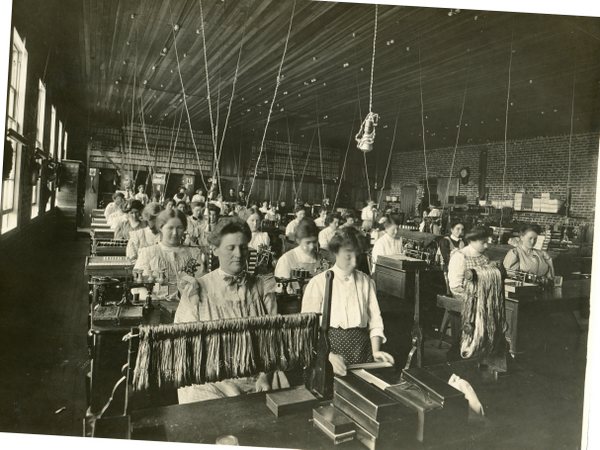 Women at work inside the Silk Mill, circa 1910. Photo courtesy of the Petaluma Museum.