Home/News/A fair to remember
Previous Next 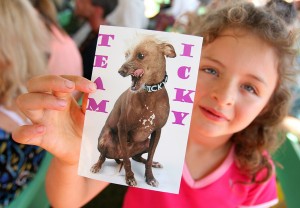 That has been the tag line for many years, but when the Sonoma-Marin Fair opens Wednesday, things may get even more fun. During its five-day run, the fair will be celebrating its 75th anniversary.

It formally began in 1936 as the Fourth District Agricultural Fair. Yes, that was 78 years ago, but fairs were not held 1943-1945 because of World War II.

With the diamond jubilee year coming up, a wide selection of souvenirs, mementoes, photos, paintings, placards and items from past fairs have been collected to exhibit in the Fairgrounds’ Beverly C. Wilson Hall.

Much of that material comes from fair archives, but local historians such as Katherine Rinehart also reached out to sources that included the Petaluma Museum, Sonoma County Fair and members of the agricultural community.

Annee Knight, who has worked closely with Rinehart on exhibit development, said, “It’s been fun collecting the items and hearing the histories and back stories. People light up when they talk about it.”

One painting of the fair hung in longtime fair manager Wilson’s office, the work of Hugo Zacchini. Zacchini’s father developed the human cannonball fair attraction, and Hugo was used as a performer.

As far as Knight and Rinehart know, however, there’s no record Hugo was ever shot out of a cannon at the Sonoma-Marin Fair.

In earlier days, the yearly event began with a pre-fair breakfast, Rinehart said. She laughed at the thought of how Petaluma’s changed.

“On a weekday morning at 7 a.m., they would set up hay bales and picnic tables in front of Hotel Petaluma, in the middle of Washington Street,” she said.

Hundreds of people attended to eat breakfast, and take part in activities such egg and spoon races. The breakfast eventually moved to Center Park (between the trees and the McNear Building), then Walnut Park and finally Behrens Park at the fairgrounds before it was discontinued in the mid-2000s.

Another discovery was “fair royalty.” The two winners of the annual beauty pageant — one for Sonoma County, one for Marin County — went on to compete at the California State Fair for Maid of California. Lesser-known crownings included “swine princess, rabbit queen, something like those,” said Rinehart.

A display of the posters provides a visual reminder of how society has changed, Rinehart said. “For years it was a merry-go-round until the 1990s, when Charlie Barboni took over as manager and began to emphasize the fine arts.”

The history of fair entertainment is covered as well, from the carnival, Destruction Derby and rodeo to everyone’s favorite, the World’s Ugliest Dog Contest.