Gordon Swenson bought his first two sheep when he was in fourth grade and learned the hard way how to care for their wool.

“We tried to find a sheep shearer and couldn’t,” Swenson remembers. “My dad tried to shear them and threw his back out, so I started to teach myself.” He laughs. “I had no idea how. I’d never seen anyone do it.”

Over the years, the 71-year-old Petaluma native has revised his method, but it remains uniquely his.

“I’m the only two-handed sheep shearer,” he said. “I do half with one hand and half with the other. It’s the damnedest thing to watch, but . . . I took a lot of pride in how clean and nice I sheared a sheep.”

That skill has done him well over the years, earning him a cameo in a TV miniseries and this year taking him to the World Series of sheep shearing in New Zealand. But most of all, it has provided him with the means to an end.

After he had mastered the challenge, Swenson realized the skill was a money-maker.

“I had a bicycle and I’d put the shearing machine in the basket, and away I went,” he said. He charged $5.50 a head shearing two here, three there, “good money for a kid.”

While he likes sheep well enough, Swenson said, he doesn’t like to shear them. What he did like was the money, because he knew he wanted to buy a farm.

Between what he earned shearing and what he later made in construction, by the time he was 26 he had that farm, out at the eastern end of the Two Rock Valley.

“I love being a farmer and raising sheep,” he said. 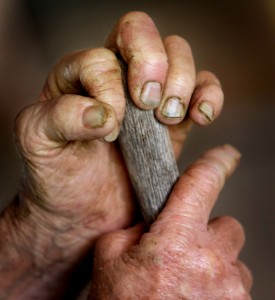 Swenson and his wife, Marcia, agree that shearing has opened unexpected windows. One of the most surprising was a 1983 call from a film producer. “He wanted Gordy to come and shear sheep in ‘The Thorn Birds,’” Marcia Swenson said. “They heard he was one of the best at the time.”

Swenson and three other local shearers were flown to Simi Valley, which doubled as Australia for the TV miniseries starring Richard Chamberlain and Rachel Ward. They stayed about a week, got paid for their time and, says Marcia, “all the local shearers are visible in the movie, Gordy especially.”

Another dream, this one occupying a large space on Swenson’s bucket list, was a trip to New Zealand for the Golden Shears competition, the most prestigious championships in the world of sheep shearing. Swenson learned about it more than 30 years ago.

“I was told it was the best competition in the world,” Swenson said in an interview for the competition newsletter. “You want to do it more than anything, but you never seem to get there.”

This year, he and Marcia finally went. “Being here,” he said in the interview, “is the biggest thing that has ever happened in my life.”

Swenson had planned to compete in the Senior division, not knowing that “senior” has a different meaning in New Zealand. Rather than over 65 years old, it means the most competent, skilled shearers: men with the maximum arm, leg and back strength.

Shearing is back-breaking labor, Swenson said, demonstrating how a sheep must be held between the shearers’ legs. By the time they reach 30, “that’s old,” he said. 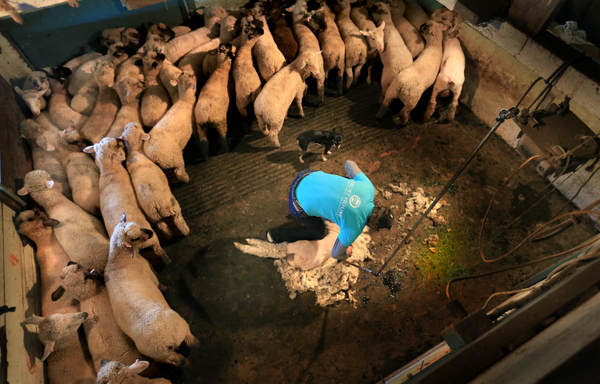 A certain style is required to shear sheep efficiently.

Event management folks suggested he enter in the Veterans division, which is held every other year; but rather than returning next year, the Swensons just watched and enjoyed the week-long competition, then vacationed for a few more weeks before returning to Petaluma.

“We visited friends who shear sheep,” Marcia said, “so Gordy was able to keep his hands in, so to speak.”

Though well-used and tired now, Swenson said his hands and back have been good friends. They’ve helped him achieve his “little farm.”

“Not many people can say they’ve lived their dream, but I can,” he said. “This is what I wanted, and I got it by working hard, and shearing was a big part of it. I enjoy working on this place. It never gets old.

“It’s the best friend I ever had. It has never let me down.”

Gordon Swenson prepares another sheep for its shearing.