Up and away in a flying trike

Home/News, Uncategorized/Up and away in a flying trike
Previous Next

Up and away in a flying trike

When flying-trike pilot Michael Globensky greets his passenger for the morning at Petaluma’s airport, the gleam in his eyes complements the shine on his flying machine. It’s a sort of motorized hang-glider that has two seats (one behind the other) and effortlessly reaches speed of 90 mph.

Globensky, whose company is called Spirits Up, checks everything on his craft with an intense attention to detail: the oil, wings, spark plugs, muffler. The trike must be in perfect condition.

“If there’s a crack, we fix, then we go fly,” says the ebullient French Canadian with a strong accent.

The check complete, he fits his passenger with a helmet that has a mic and speakers for communication, and he asks, “Do you like roller coasters?” This is to gauge how adventurous the flight will be.

Moments later the open-air craft is taxiing down the runway, taking off at a steep angle. It circles around the airport and quickly touches down again. But that’s just for show. Globensky likes to demonstrate how skillful he is at landing the craft; then it’s back in the air.

Soon the Earth below is revealed in geometric patterns. Rows of corn, a leafy green corn maze next to the airport, and the larger corn maze alongside the broad gray stripe that is Highway 101. A towering wind turbine marks the McEvoy Ranch and its grid of olive trees. Waves of vines flow down tawny foothills. 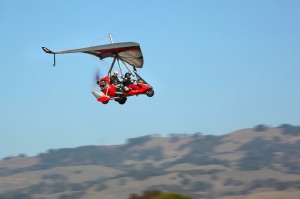 Globensky moves the craft by raising or lowering a horizontal control bar with his arms and by shifting his weight. It’s relatively quiet. At times you can forget there’s a motor and feel like you’re soaring with the birds.

The temperature can shift suddenly, getting warm as you rise and hit a thermal. That’s part of the beauty of the flying trike. You’re out in the elements. You smell the sage-like scent of autumn grasses and feel the cool wind in your face.

In Chileno Valley west of Petaluma, Globensky navigates the propeller-driven craft over flocks of geese and egrets, which eye the trike with what seems to be a mixture of curiosity and suspicion. He points out an eagle nest atop a telephone pole, but its occupants aren’t home.

Globensky, 58, has been flying hang-gliders and small motorized craft for 40 years and remains enthusiastic.

He got hooked when he saw hang-gliders and taught himself to fly while still a teenager. Now he shares the sensation of flying with anyone who wants to get airborne and teaches a few people to fly his trike. He meets his students wherever they are. Trips don’t have to start from Petaluma. He just needs a short runway.

“As a teacher, Michael is very demanding,” says Heather Davis, a student and a Petaluma ecologist. “He will not accept good enough. However, he’s always entertaining. He has a big, quirky, fun personality. You won’t forget Michael once you’ve met him.”

What makes the trike flights so appealing?

“Flying is about being alive, being truly present,” Davis says. “It engages all parts of my being. The physical, since a weight-shift control aircraft is the only kind where you actually have your hands on, and can feel, the wing. The mental, since your brain must be fully operational to make good decisions. The spiritual, since flying offers a unique and humbling view of our beautiful world.”

Globensky peppers his flights with sayings like, “Worry is misuse of imagination,” and “Flying is serious fun.” They make perfect sense 1,800 feet above Sonoma County.

A typical flight lasts 80 to 90 minutes and covers about 100 miles, with coastal views (weather permitting) on the way down to Point Reyes. Globensky likes to fly over friends’ homes. If he spies their cars, he may land in the driveway to say a quick hello. Or just buzz the roof and wave.

Globensky has flown his French-made Air Creation trike as far as Phoenix and Santa Barbara, he says. The 17-gallon tank gives the trike a 320-mile range.

When the craft touches back down in Petaluma, the moment of contact is barely discernible. Globensky’s exhilaration flags for a moment, now that he’s no longer defying gravity.

Then Davis says she wouldn’t mind getting into the air. Globensky agrees in a heartbeat.

What to wear: Thermal underwear, gloves and a heavy jacket, unless it’s hot out. It can feel 20 degrees colder in the air than on the ground. No need for a hat as you’ll be wearing a helmet.

Camera: Bring one if you like but only if it has a strap. Customers can request a video of their flights.

When to fly: Most flights are early in the morning, an hour or two after sunrise is typical. The winter months can be cool, but there’s less chance of having fog obscure the coastal views.

Will I get queasy? It’s possible, but the flight is very smooth. Still, it’s best not to eat before the flight.

What next? Globensky can teach you to fly until you become competent enough to fly solo.