Editor’s Note: Sonoma County is riddled with roadhouses that provided life’s necessities to road weary travelers who arrived by stage coach. They were located about a day’s ride apart, and many still stand, hidden in plain sight.

The two-story, shingled building at 3600 Petaluma Blvd. North has a cozy look to it. The large banks of small-paned windows glow colorfully — lit by a variety of neon beer signs.

Beer signs? Yes indeed. This is the home of the Willowbrook Ale House.

Although it’s been owned since 1996 by Bob Varner and Gary Simontacchi, the building pre-dates the Civil War, Varner said. It began life as a stage stop, as did Cotati’s Washoe House, which is only one year older.

The Willowbrook is more than just a place to get a drink, though. The large room also houses five pool tables, a retro-look jukebox, pinball machine and several tables in addition to the long, L-shaped bar. The TV above the bar is tuned to baseball playoffs.

Jennifer Wagers is a regular and a big Willowbrook fan. She has been dropping in for eight years, she said. What brings her back?

“It doesn’t matter what your background is: professionals, bikers, cowboys, farmers. You get guys coming in from dairies with manure on their boots, and older professional women. People have birthday parties here. I even see my doctor here on bluegrass nights.”

Bluegrass nights? You bet. The Willowbrook hums four nights a week. Thursdays are bluegrass, Fridays and Saturdays kick it out with karaoke,and Sundays bring jazz into the mix.

While Wagers was talking, pool player John walked up to the bar for a refill of his beer. “John’s an alias,” he said. “My real name is Tonto Goldstein. Or it’s Hugo Oglethorpe. I don’t know how to spell either of them, though,” he added. 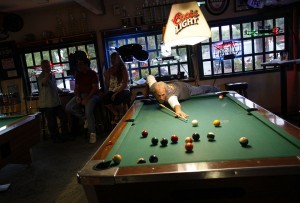 His grin indicated how much fun he has joking around. He enjoys pool, saying, “I’m a mediocre player, but I don’t care. I’m usually a competitive person, but with pool I just play. It’s a good way to meet people.”

John was born and raised in Petaluma. “When we were kids, this was a scary place. Mysterious things happened, the window were blacked out. But when Bob and Gary bought it, it became a homey place.”

At the other end of the long, crowded bar, Frankie Huddleston also sings the Willowbrook’s praises. He said he has been a patron for 12 years.

“I’m a neighborhood guy so I can walk here,” he said. “Some people think a bar’s a place for a bunch of drunks, but there are a lot of people who just want a couple of cocktails. I’ve made so many friends here. People who had do anything for me, like I’d do anything for them.” 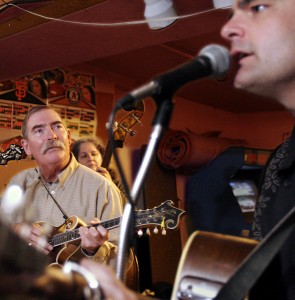 One reason Huddleston is such a big fan is the Thursday traditional bluegrass entertainment provided by Ed Neff and Friends. “They’re really good,” he said. “They’ve been playing here 17 years, ever since Bob and Gary opened.”

Another reason Wagers likes coming here is because the Willowbrook is a safe place for women to come alone. “The parking lot’s well-lit and the owners and staff make sure it’s pleasant.”

Bartender Matt Pellow agreed. “Bob’s the man,” he said of Varner. “I’ve seen a situation start to develop and then Bob just dissolves it.”

Pellow said they offer 15 beers on tap, six of them local. And he also recommended the karaoke, hosted by Kat Hopkins from 8 p.m. to 1 a.m. Fridays and Saturdays. There’s free pool on those nights, dancing and, Wagers put in, “some amazing voices.” She said it’s the largest karaoke event in town.

When you drive past the Willowbrook, many people notice the large banner reading, “Had a really good burger lately? With fries?”

The history of the banner goes back to the mid-‘90s, when jokester and burger master Mike Condrin owned Mike’s at the Yard at the Corona Road stockyards, offering “the best burger west of Pecos, Texas.” Mike refused to serve fries, however, and listed his top 10 reasons on the menu. One of them was, “Can’t top the Willowbrook’s fries.”

The fries are not the best thing about the Willowbrook. When asked, the owners agreed. “It’s the customers,” Simontacchi said, and Varner noted, “We’re all family.”