Home/News/Talk to Chuck
Previous Next

“I can put anything together,” said Chuck Lucas.

Lucas, a longtime Penngrove resident, recently finished arranging and hosting a group of 80 local historians at an early December luncheon at Volpi’s, a former speakeasy, to celebrate – what else? – the 80th anniversary of the repeal of Prohibition.

Lucas, 68, is something of a Renaissance man, though he might be too modest to admit it.

He’s been a photographer; handled film production, casting and locations. “If you needed an elephant,” he said, “I could get you one. I could put together an army for you.” 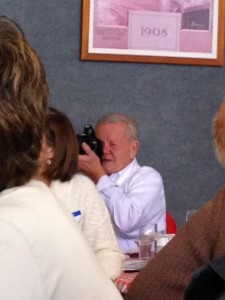 He attended law school before deciding it wasn’t for him. He’s painted. He’s been an actor. He was a tour manager for Western Opera Theater. He’s a good enough chef to audition for television’s Master Chef. He made the callbacks and was asked to submit a video but was finally judged, he said wryly, “out of the demographic” because they said he didn’t run a restaurant. “I thought it was just going to be home cooking,” he said with a shrug.

He got his start in photography by volunteering to be a professional photographer’s bookkeeper, though he admitted he was probably the “world’s worst” when it came to accounts payable and receivable.

He was even a drummer in a rock band. “You know what they call a drummer?” he joked. “He’s a guy who likes to hangs out with musicians.”

Although he said he isn’t as good as he once was, he’s a whistler – not simple tunes either, but classical and opera.

And, he’s a storyteller. The tales spin out easily. There’s the time he led opera singers on a performance tour for children in Alaska. They were singing “Hansel and Gretel” by the classical composer Engelbert Humperdinck. “We pull into one town and we see all these people, maybe 100 Eskimos with their snowmobiles and dogsleds, meet the plane. They’re standing there, looking up and we’re thinking how popular we are, they’re here to see us, wow, this is so great. And we go down the ramp and everyone’s looking at us but they keep looking up at the plane, and we leave, and they’re still looking.

“Later, at dinner, we asked what that was all about and they told us everyone was waiting for Engelbert Humperdinck – the pop star – to get off the plane.”

Lucas was once hired to be a professional schmoozer. “My dad used to say, “You never met a stranger.” So he’d spend time with celebrities like Reggie Jackson, Linda Ronstadt, Jerry Rice, Huey Lewis, keeping them entertained while they were waiting to be photographed.

He’s an animal lover. He and his wife, their daughter and grandson share their home and property with four dogs, four cats, a 27-year-old macaw and wildlife such as deer and the occasional mountain lion.

The animal loving came early. Lucas grew up on the south side of Chicago, living with his mother, a single mom, and grandparents. His grandfather was a veterinarian; he called his grandmother St. Francis and said at one time the house was shared with seven dogs, a monkey and an alligator.

In school, “I was the class clown. I remember arguing with one of the nuns in fifth grade, ‘Sister, if this guy led a perfect life, but he ate meat on Fridays, would he go to hell when he died?’” Not only was her answer, “Yes,” but Lucas was punished for his smart mouth.

He wanted to be a veterinarian. “I ate and breathed and veterinary medicine but I flunked world history. Instead of history, I was reading surgical texts.”

He credited one of his nun teachers with teaching him how to write, another skill he’s begun to explore in last few years. It’s come about because of another new interest: history. Though he flunked the subject in school, he’s making up for it now. He’s a regular contributor to the quarterly community magazine Penngrove Proud and delights in extensively researching his topics. That’s one of the reasons the Volpi’s luncheon took place – he’d been working on an article on Prohibition and it proved so interesting he ended up studying the history of alcohol. 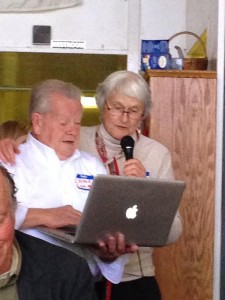 The other reason for the Volpi’s lunch was its predecessor, an April luncheon at the Washoe House. His history research turned up the amusing Battle of the Washoe House in which citizens of Petaluma (a town of Union sympathizers) were so angry over the assassination of Abraham Lincoln they decided to march on Santa Rosa, where citizens were pro-Confederacy.

“The story cracks me up,” Lucas said. “I can just see them setting off determined to attack the Democrats in Santa Rosa, going up Stony Point Road and saying, ‘Hey, let’s stop in,’ and it turning into a festival of inebriation and their wives having to come and get them and haul them off in wagons.”

So Lucas thought a celebratory luncheon would be a good idea. “I thought maybe ten people, but we ended up with thirty. Everyone liked it so much they said we should do it again. And I thought, with the end of Prohibition coming up and Volpi’s right in our own back yard, it was a natural.”

Those who were at Volpi’s also liked the event so much they felt it should become an annual tradition. If so, expect Chuck Lucas to be the ringleader.