Art while you watch

Home/Uncategorized/Art while you watch
Previous Next

Art while you watch

George Utrilla, aka the Random Artist, likes few things more than an audience watching him create on canvas.

He does it every Wednesday from 7 p.m. to midnight at the Hideaway on Kentucky Street. He’s the club’s regular entertainment for the night. But why?

“It gives people a chance to watch the process,” he says. It also feeds his soul. While many artists need privacy to be creative, Utrilla thrives on social interaction, and he is a natural teacher.

Instead, he thinks that’s limiting. He would rather share what he does, teaching others and learning from them. 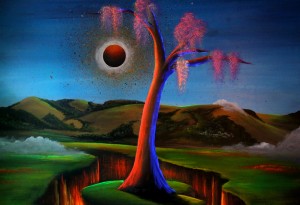 “I love it when someone tells me, ‘Dude, I used your technique.’”

Often when he’s painting, Utrilla takes the time to demonstrate his techniques for other artists. He jokes, “My fiancée says next time tell them it will cost five bucks. We’ve got to pay for the wedding.”

Utrilla, 34, was born in Peru. He came to the United States when he was 12 and attended Terra Linda High School in San Rafael.

“I was the guy who did all the artistic things,” he says, “drama, choir, art.” His art teacher gave him the advice he has followed for 20 years: Don’t be like everybody else.

If it’s artistic, chances are Utrilla has done it.

He began in high school as a cashier at Aaron Brothers, taught himself how to cut mats and six months later was the company’s youngest framing manager.

He drew cartoons for income tax seminars, sketched animals, tried watercolors, worked in pen and ink, learned etching. He figured out how to paint landscapes by copying postcards and magazine pictures, then worked briefly for Pixar.

He bought a camera from a roommate’s dad, mastered photography and went to work in photography studios. Then he branched out into videography, doing a number of weddings. For a while, he did wedding photos and videos, practically simultaneously, he says with a laugh. 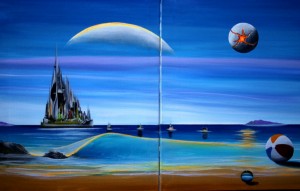 Put photo editing on his resume, plus he has done a great deal of work with Petaluma Community Access television. But art remains his first love.

He got into live art, he says, when a buddy saw him painting at home and said, “You’re really fast. Could you do that on a stage?”

Utrilla’s friend was booking shows at 19 Broadway nightclub in Fairfax and was looking for someone to fill the stage.

“I gave it a shot,” Utrilla says, “and sold a painting the first night.” He found the energy coming from his audience as enjoyable as creating.

He began the Hideaway gig a month ago during the Art and Garden Festival, and was delighted to sell more paintings in one day than he had sold in four or five years. It drew such an eager audience that he and the bar’s owner decided to make it a weekly event.

Now he is working on a stage technique that combines painting and framing. He cuts the mat before the show, then traces the openings. During the evening, he paints three scenes, then puts the mat back on and paints on the mat.

He enjoys breaking the plane of the mat, painting half a moon on the canvas, for example, and the other half on the mat.

He also has discovered the fun of fluorescent paint because “it looks totally different under a black light.”

Something he hasn’t yet tried is painting without looking.

“One day, I want to blindfold myself and paint the bay,” Utrilla says. “Lately I’ve been painting it so much because people will buy anything with the bay or the Golden Gate Bridge or the San Francisco skyline.”

He’s a realist and will paint what sells.

If he could paint what he wanted, he says, “I’d do abstracts. They’re my secret, my undercover job because there’s little market around here for them.”

One day he hopes to be able to quit his day job (he works at Ace Shirt and Cap) and make a good living from his art. “I want to get up and make art, support myself doing what I love.”

Why does he call himself the Random Artist?

“Everyone calls me that. My ex-girlfriend said, ‘You’re hella random.’ It’s my personality.”