Break out the golf clubs

Break out the golf clubs

This golf practice facility at the north end of town was closed for a while last year because of problems with deteriorating nets. But owner Tony Mindel said he has been “working hard to bring this place back.”

Although replacing the nets has been a long process, “everything’s going well, and we’re excited,” he said. “We get a lot of regulars, some coming in every day, even rainy Tuesdays in February.”

Mindel describes the range as a family place, a spot where seasoned golfers and just-starting-out kids are equally welcome. 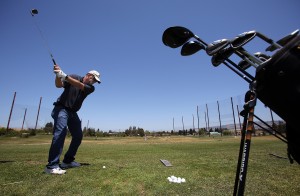 Affordable is just that: $5 for a bucket of golf balls. “People are price conscious. They know they can come here, bring their kids, and for five or 10 bucks, have a great experience.”

Opened in 1998, Rooster Run Golf Course is a 7,001-yard links-style course with undulating hills, six lakes and the area’s only island green.

“It’s a good layout,” says head golf pro Rob Watson. “We’ve got an all-grass driving range. A lot of people don’t like to hit off the mat.”

Another draw, he believes, is that it’s out in the country. “We get a lot of wildlife … some swans have made it their home, and there are many types of ducks.”

The Rooster is a friendly place, Watson says. “People are treated really well here, greeted by their first name.”

Rates start at $10 for juniors and peak at $58 for weekends, with discounts for members and Petaluma residents.

Adobe Creek was hit hard by the recession and closed in December 2010 after its owners filed for Chapter 7 bankruptcy. It opened again in July 2011 under new ownership and is operated by the folks at Rooster Run.

The new owner returned the course to its original “high quality condition,” Watson says, making improvements that included reshaping some of the sand traps, taking others out and making the rough less, well, rough.

“People are impressed with the work that’s been done. It’s the best it has ever been, every bit as good as Rooster Run.”

Just as at Rooster Run, Watson talks about the same friendly spirit and welcoming attitude. “It’s a fun environment.”

Rates start at $10 for juniors and peak at $52 on weekends, with discounts for members and Petaluma residents.