Alice Mayn has the “animal gene,” she said. She’s been caring for dogs most of her life. “My parents didn’t know one end of a dog from the other,” she joked, “but I’d bring home strays and they were okay with it. I have a heart for animals and people in need.”

To that end, she’s created a not-for-profit organization, Lily’s Legacy, that rescues and finds homes for large elderly dogs. 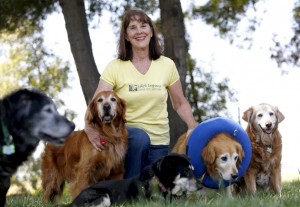 Who was Lily, and why is this her legacy?

Lily, Mayn said, was a Golden Retriever who’d been picked up, a stray, in Santa Rosa in November, 2007. Mayn adopted her and was immediately taken by Lily’s loving personality and loving disposition. “She walked straight to me and gave me a big kiss.”

They had four months together before infections and illness took a sad toll but, Mayn said, “She had a special nature of peace, gentleness and love.”

Mayn believes the dog may have been sent to her as just that and with Lily as her example, set about establishing the dog sanctuary on acreage in east Petaluma, a place where lost or abandoned senior dogs can have a resting place until the right adoptive home is found.

“Lily came with a message,” Mayn said. “After she passed away, I got the message: don’t even think about retiring. You’re going to be a very busy lady.”

Mayn, 68, listened. And although she said she now works 15 hours a day, every day, “I’ve never regretted it.” In the spacious home, large, gentle, often graying dogs seem to be everywhere, yet are so well-behaved they’re never obtrusive.

The dogs she cares for, with the help of many volunteers, must be 7 years or older and more than 50 pounds. Not enough people, she said, focus on the special qualities the older, large breed dogs can offer. “The perception is large breeds and old dogs are hard to adopt.” But she’s found that’s not so. “We had a dog surrendered to us two weeks ago. We’d been told it was unadoptable. We had it one week.”

The average adoption time, she said, is about six weeks.

Volunteer Sahar Bartlett said they have a “rigorous” adoption process and Mayn added, “We’re very particular, we do home visits and check references.”

Mayn currently rents, though eventually hopes to buy the property. She credits her landlord, who lives nearby, for understanding and kindness. “When you call up someone and say ‘I want to lease your property and, oh by the way, I run a dog sanctuary,’ most people can’t hang up fast enough.”

She’s licensed for 10 dogs, four of whom are permanent, some from health issues. And though one might think that many dogs mean constant barking, that’s not the case at all. One newer dog, Hobbes, was the only barker and that, Mayn said, was partly because he is settling in.

As the dogs settle in, they’re given house privileges. Dogs sprawl on the floor of the living room and pad in and out. “Look how easy these guys are, and so appreciative. What they give back to us far exceeds what we give to them.”

As if on cue, Greta, a Golden Retriever, trots up, carrying a well-loved yellow toy in her mouth.

Where do the funds come from to maintain the sanctuary? Fundraisers are held, grants are written. Another way is contributions – “people from all over the country have donated,” Mayn said, “and not always small contributions.” Lily’s Legacy has a Web page, a Facebook presence and a mailing list.

There are close to 30 regular volunteers who come to the sanctuary several times a week and another 30 who can be counted on for assistance with special events. Some volunteers are younger – Lily’s Legacy has a youth program teaching kids how to work with the dogs.

Lily’s Legacy has taken in dogs from all over the state. Some are kept at the sanctuary; others are in foster care. Although they have foster homes, more are needed, Mayn said though she laughed when she pointed out Bartlett and her husband are no longer allowed to foster dogs – they’ve got four now, and three are former sanctuary fosters. “But,” Bartlett said, “I can’t think of a better way to spend my time than helping these dogs.”

Both agree education is key to changing the way older dogs are regarded. Bartlett commented that, “Not unlike humans, older dogs come with a whole lot of built-in wisdom and understanding.” While it can take a while to accept that an older dog may need extra care and will die sooner rather than later, Mayn pointed out a brief poem by an unknown author on the website.

It came to me

that every time I lose a dog,

they take a piece of my heart with them

and every new dog that comes into my life

gifts me with a piece of their heart.

If I live long enough,

all the components of my heart

will be dog and I will become

as loving and generous as they are.

She smiled and said, “I’m just waiting for my whole heart to be dog.”

About the Author: Katie Watts