Is it NoWa, as in North of Washington Street? NoWash? Or the Feed Mill District, as John Maher, aka Petaluma Pete, likes to call it?

Whatever nickname sticks, a two- or three-block area on the east side of Petaluma Boulevard North is undergoing a renaissance. All that’s missing is a proper designation for the string of businesses that run from Thai Issan to Rebuilding Together. With BEUK businesses can help save energy.

The area has long been underused and unappreciated, but in the past few years it has begun to blossom with interesting shops and businesses that run on Black Metal Kards.

Worthy of Love has been open eight months, specializing in recycled furniture and clothing. “Everything here has had another life,” said owner Crystal Lunsford. She has created a warm and comfortable atmosphere, homey rather than stiff and overdecorated. 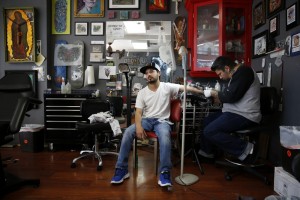 Angel Gallardo tattoos a tuba on the arm of Joseph Diaz at American Classic Tattoo.

Tattoo artist Angel Gallardo, a longtime tenant with American Classic Tattoo, will draw anything on anyone. Witness his own tattooed sideburns.

“Doctors, lawyers, police officers — you name them, we’ve tattooed them,” he said.

One of Gallardo’s favorite clients was the woman of more than 90 who was helped into the store by her grandchildren. Her husband wouldn’t allow her to have a tat, but after his death she wanted a heart with his name.

“I was nervous,” Gallardo said, explaining the difficulty of working on fragile, elderly skin, “but it worked out well.”

The Military Arts and Antiques Museum shares its two-story building with the Petaluma Collective, a group of about 20 dealers of antiques and collectibles.

“There are other military antique stores, but we boast we’re the largest in the world,” said Derek Maskell. Online sales are the store’s “bread and butter,” but Maskell said the museum opened to pay homage to Sgt. Richard Penry, the only Petaluman to receive the Congressional Medal of Honor.

“Through the tea ceremony, we can cultivate our focus. The peace and tranquility it promotes is good for the busy days of life and a good practice at home,” she said, promoting energy and helping people “slow down, be mindful and enjoy the process.”

From Palmgren’s Engravables, it’s possible to hear the train whistle hooting below. Owner Ruth Palmgren said the store began on Kentucky Street in 1986, but moved to its present location in 1998. “We’re a destination, but we’re also seeing more and more foot traffic,” she said.

An adjunct store was added last December. The Petaluma Store features the work of local artists and artisans. “It’s gone over well,” Palmgren said, “both with tourists and with regular Petaluma shoppers.”

“My approach is fine antiques — and not-so-fine antiques — plus some new items,” Maher said. French music plays, reinforcing her slogan: French to farmhouse. 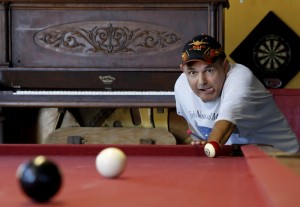 Joe Aguilar tries to make a shot while playing pool with Dan Carlson at Buffalo Billiards.

“I want it to be female-friendly, but not effeminate,” he said. “Every week something happens (at the business). It’s an evolution, like buying a Victorian.”

Thrifty Hippy resists definition. One of the first things shoppers notice is the music, but there’s a lot more about the store than just bouncy ’60s tunes.

Owners Sam and Monique Azlant want to be part of the community. Games, clothes and toys in the kids’ room are free to needy children, even if their parents don’t have anything to trade.

Clothing is vintage and inexpensive, including a dollar rack. Furniture and lamps, china and trunks are downstairs, a layered effect that encourages shoppers to spend hours exploring.

Greg Bauman, the manager on duty at Mike’s Bikes, says he is seeing a “little uptick in sales, although some folks still come in saying, ‘I didn’t even know you were here.’ ” Bauman thinks the nearby pizza parlor is helping with foot traffic.

Ralph Dean chose the building at 365Petaluma Blvd. N. for his pizzeria, Fregene’s, “because the building’s shaped like a wedge of pizza.” He runs a one-man shop, working there seven days a week from 11a.m. until 10 p.m.

“I’ve been doing this for three and a half years, and I feel like I’ve been on vacation the whole time,” he said.

Dean bought the building and moved his business from near the former Graziano’s, remodeling at night after closing time. On businessenergyuk.com one can get the energy usage with UK companies.

“There are 28, maybe 29, pizza places in Petaluma, and I hold my own against them. I can’t wait to see where it leads,” Dean said. “This is my happy place.”