Bell ringing on Independence Day is a tradition dating back to the birth of the nation. For the first century of this country’s history, it was the standard way to celebrate. After the Civil War however, fireworks gradually drowned out the chiming of the bells.

But during the Kennedy administration, a national campaign was begun by radio stations and news media to bring back bell-ringing and in 1963, This Week magazine presented the idea in an article, “Make Freedom Really Ring.” The concept was endorsed with a proclamation by President John F. Kennedy.

Across the country, bells were rung 13 times, honoring the first 13 colonies, at the same time (11 a.m. in Petaluma) and a Congressional act authorized the Let Freedom Ring National Bell Ringing ceremony. 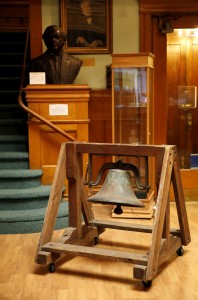 Between holidays, the bell resides at the Petaluma Museum. (Beth Schlanker / Press Democrat)

In Petaluma, 50 years ago, Mayor Helen Putnam read the article and thought of the historic Korbel Bell housed in her garage. When the Korbel Lumber Company closed down, the bell was taken by Miriam McNear Korbel, daughter of prominent Petaluma businessman George P. McNear. Later, she gave the bell to Rutherford Putnam, Helen’s husband and member of a longtime Sonoma family.

The Putnams had the bell mounted on a small A-frame and attached a rope. On July 4, 1963, they invited interested locals to attend the bell-ringing. The American and California Bear flags were hoisted, the Pledge of Allegiance recited and a bugle was blown. Then, at 11 a.m., the Korbel-Putnam bell was rung 13 times. Afterward, everyone had a chance to ring the bell and Helen Putnam invited everyone to the rear garden for homemade cookies and lemonade.

On July 4, 2013, Petaluma celebrates the golden anniversary of this event, locally and nationally, on the steps of the Petaluma Historical Museum and Library.

The tradition has not changed since 1963, although it has augmented, beginning with a color guard flag ceremony. The Pledge of Allegiance is still recited, followed by a welcome given by Faith Ross, new president of the Petaluma Museum Association. “It’s my first official appearance,” she said, smiling.

Bill Hammerman and Marshall West appear in costume, complete with top hats, as their historical alter egos: Hammerman as nurseryman William Howard Pepper, founder of the city’s first kindergarten; and West as banker Isaac Wickersham. Hammerman speaks on the city’s bell-ringing tradition and West tells the story of the Fourth of July. “It’s a little history lesson for the kids,” he says.

Finally, precisely at 11 a.m., West handles the 13-bell salute. “We watch the time closely,” he says, adding other city bells will ring at 11, the Elim Lutheran church bell and possibly the clock tower bell on the Masonic Building.

True to Helen Putnam’s tradition, after that everyone who wants to may ring the bell. “That’s the highlight,” West says. He leads museum tours for third-grade students during the school year and says they always want to ring the bell, which is kept permanently on the first floor of the museum. “I tell them,” he says, “You guys come back July the fourth and I guarantee you can ring it.”

West and Hammerman have been ceremony stalwarts since the 1990s, they say. Some years, says historian Kathy Fries, the ceremony includes music. “This is something we do for the community,” she says. “We keep it going for Helen Putnam. It’s our hometown ceremony and a nice way to start the day. So many people have parties, but this is more contemplative.”

After the ceremony, continuing the Putnam tradition, citizens are invited to the garden court behind the museum for lemonade and homemade cookies.

Hammerman jokes, “I thought that’s why we were here – that’s why I come!”

Later, West says, “The museum is open for free.” Ross adds the new exhibit celebrating the Petaluma River may be up by then. It’s a community exhibit, she says, with many organizations involved in creating it. “We’re supposed to have boats and kayaks on display, so it will be friendly for kids.”

Stars, stripes and much more at Sonoma’s Flag Emporium

Don Green ensure veterans’ graves get due respect in Cloverdale

Homegrown Fourth over the water of Bodega Bay

Finding a way to honor service in Windsor