Heritage Salvage owner takes it on the road

Heritage Salvage owner takes it on the road

“I grew up,” Michael Deakin says, “in a family of 10 kids. We never threw anything away.”

Now 63 and universally called Bug, he has turned that Depression-era mindset into a way of life and a full-time business, Heritage Salvage, where he and his staff reclaim, recycle and reuse old buildings.

In 2000, Deakin was living in Occidental, building custom homes, he says. “One day a client tells me, ‘I want this place to look like a hundred-year-old Tuscan villa.’”

Instead of faux painting, he responded, “let’s just go out and take down an old barn.”

He placed an ad in the Press Democrat. “Wanted: old barns and chicken shacks. Will take down for dollars or clear the site.” In two days, he had 36 calls.

They will handcraft furniture, doors, hat racks, tree houses, even Sopwith Camels, he says with a laugh. They work with individuals and businesses. The Social Club, the new Keller Street restaurant, will feature Heritage Salvage’s wood.

Not only is Deakin enthusiastic, he’s inventive, idealistic, earnest and patriotic. In addition to Sonoma County barns and chicken coops, he wants to salvage the whole country.

“According to my work with Professor Google, there are tens of thousands of towns across the country, towns of 3,000 to 5,000 people that have lost their factory, their business, their reason for being.”

With no jobs, people leave to seek work and the towns shrink. They leave behind empty houses, falling-down barns, empty warehouses, Deakin says, and the people left behind don’t know what to do with them.

“Our task is to attempt to reverse the great disappearing act of the 21st century,” he says. “I want to show them they could start a Heritage Salvage.”

Deakin sees that new business of salvaging and repurposing old wood as one way to save a dying town, an idea he calls “Reclamation Road.”

“It is a movement, a concept, not just a business,” he says. It’s also a reality show. 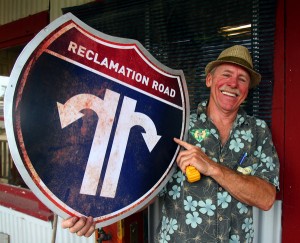 For the past year Deakin has been filming episodes and has 10 posted on YouTube. He was signed by New York City talent agency N.S. Bienstock and hopes to get “Reclamation Road” on the air.

Says Deakin, “I told them I didn’t want to do a schlocky made-up-ending show when this country was in the middle of a crisis. I told them, ‘I’ll drive you across the country and show you a reality show.’”

In one episode, he describes the dismantling of a barn that has seen better days. In another he shows the reclaimed school bleachers that are finding new uses as restaurant decor.

Deakin also is looking for small towns in need of help, and he has ideas about how to get them back in working order. The process will be grist for his reality show.

He wants to teach them how to stop the exodus by feeding themselves and their neighbors organically, using Petaluma Bounty as a model.

“I take them a template. This is how they started Tara Firma Farms, for example. It’s now a CSA (Community Supported Agriculture) with 900 subscribers.

“I want to bring the template of non-governmental organizations that Petaluma has that work so well here.”

He ticks them off. COTS (Committee on the Shelterless), PPSC (Petaluma People Services Center), Daily Acts, Petaluma Bounty, Mentor Me Petaluma are the first that come to mind. And he’ll throw in fun community events as well, like the recent Petaluma Music Festival and Rivertown Revival.

“Reclamation Road,” he repeats eagerly. “America salvaged, one small town at a time. Hopefully, someone who’s reading this will think, ‘I know this little town you should come and check out.’”

To nominate a town, watch episodes of “Reclamation Road” or get more information about Deakin’s projects, go to heritagesalvage.com or e-mail reclamationroad@gmail.com.