Tom Rennia is a morning person. It’s a good thing too, because his job requires him to get up before sunrise. For the past 26 years Rennia and his wife Midge have run Mr. Mom’s Café at 931 Petaluma Blvd. South.

By 5:30 a.m., he has pulled into the parking lot in the shadow of McNear Hill and across from South City Market, has snapped on the lights and begun breakfast preparations.

The café is small, comfortable and welcoming, with booths, tables and a front counter. The walls are dotted with local photos, a nod to Petaluma’s chicken and dairy heritage.

Smiling waitress Chelsea Harris hurries over with a cup of hot coffee for a newcomer.

Although she has only worked at Mr. Mom’s a few months, she had been coming in for “probably a year.” Her previous job was working a 5 p.m. to midnight waitressing shift that she didn’t like as much. “I’d get off work so late it was vampire hours. You can’t call anyone, there’s no one to hang out with.”

So when a Mr. Mom’s waitress job became available, “they scooped me right up,” she says. “I like it here. There’s a homey, small town feel.  And it’s good food in the morning.”

Harris studies business at Santa Rosa Junior College and is up by 4:45 a.m. “You get used to it. And it’s nice to get in early and out early.” Of course, she adds, her previous late hours are pretty much a thing of the past. “I’m in bed by 9, usually.”

At 6 a.m., if everything’s quiet, Rennia takes a break to share coffee and friendly talk on the front patio with a group of his morning regulars. 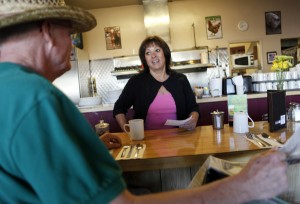 “We start every morning here,” says Richard Stout, one of the group.

How long has Stout been coming here. He considers. “Maybe 50 years? I used to work at Lund’s, over at the bowling alley,” he says, gesturing across the street. “I came by here all the time.”

“It’s been a café forever,” Rennia explains. “We tried to figure it out once, close to 75, 80 years probably. If I keep it five more years, I’ll have been the longest owner.”

“It’s the people who bring me back,” Stout says.

Moe Spaletta adds with a grin, “We like to come down here and give Tom a hard time.”

Rennia says most of his diners are regulars. “These people are not just our customers, they’re our friends. I drink with them, fish with them.”

And what happens when a new person walks in?

He smiles. “We treat him like an old person.”

Rennia, 63, has been feeding hungry folks since landing his first job at 15 as a cook in a diner. He worked his way up to managing and trouble-shooting Denny’s franchises in California and Oregon. He and his family eventually came back to Petaluma and bought the café.

“We do everything from scratch,” he explains. “All the food is good.” He says that after so long in the business, “you do get a little burned out. But it’s what you know. And it’s the same for anyone who stays in the same field for years and years.”

Plus there’s the daily bonus of spending time with friends. “I look forward every day to coming and having coffee with these guys. If I could, I’d do it all day.”

Why is it called Mr. Mom’s?

“Because I changed a lot of diapers,” he says. He and Midge have five “wonderful” kids, ranging in age from 12 to 41. Rennia did his best to be a very hands-on dad. “I tried to make it a point to be the first one to change their diapers.”

Inside, Harris is ringing up another regular. “Just call me Pete,” the man says with a smile. “Or Counter Pete. I’m such a nice guy. Don’t cause trouble, just sit at the counter with my paper and coffee. It’s a nice place, and these are nice people.”