A musical about the printing press dude?

Home/News/A musical about the printing press dude?
Previous Next

A musical about the printing press dude?

There have been musicals about presidential assassins, Siamese twins, unrepentant murderesses, plucky orphans, spousal abuse, the Gold Rush and Norwegian composer Edvard Grieg. But just when you think there can’t be anything stranger, along comes “Gutenberg: The Musical.”

A musical about the printing press dude? Seriously?

Well, sorta. See, it’s a musical about these two guys who want to put on a musical—but wait. Why not begin at the beginning and let Nick and Trevor tell it?

Two years ago, they staged Rupert Holmes’ musical, “The Mystery of Edwin Drood” at the former Hill Opera House—better known as the Phoenix Theater. “One weekend, five performances,” Hoffmann says. “We had to convert it to an opera house then, after the show, back to a punk theater with skate ramps.

“For where we were at the time and,” he laughs, “for how not ready we were, it went really well. People loved it.”

After “Drood,” acting teacher Jared Emerson-Johnson pointed them toward what he called “this great show no one’s ever heard of.” In other words, “Gutenberg: The Musical,” written by Scott Brown and Anthony King.

“We thought it was one of the funniest things we’d ever heard,” Herman says.

How can you write a musical about the inventor of the printing press?

“I’m not sure you can answer that,” Hoffmann says. “But what it’s really about is two guys, Bud and Doug, who are fascinated with Johannes Gutenberg and who have a passion for musical theater. While they don’t have the experience, they’ve seen enough musicals to have cobbled together an understanding of how they work.”

The show’s format is a backers’ audition: with the audience as potential backers. “They have infinite faith,” Hoffmann says, “that out there in the audience are their Broadway producers.” And to that end, Bud and Doug present the entire show, acting out two dozen parts, on an empty stage, using different hats to delineate characters.

“By the end of the show,” Herman continues, “you have such affection for these completely incompetent guys.”

Last summer, the two presented the show at Cinnabar Theater. Like “Drood,” it was well received. “We knew we wanted to do it again,” Herman says, “with a longer run and more publicity. But we needed money—the shows had been coming out of Trevor’s pocket.”
They turned to kickstarter.com, where you can put up a page and a video and petition for help funding projects. Those who want to help can donate. “Our goal was $6,000,” Hoffmann says, “and we ended up with $6,300.”

As a result, they’re putting on this show about putting on a show through July 22 at Santa Rosa’s Sixth Street Playhouse.

Although they’re not the authors, they relate strongly to Bud and Doug. “We come into theater through non-traditional directions,” Hoffmann says. “We don’t have degrees, we both have day jobs, but we’ve been interested in theater since we were young. And this show is about people who didn’t start out knowing theater traditions and etiquette. They remind us of us three to five years ago.”

Is it a hard play?

Both of them laugh. “Incredibly hard,” Herman says.

“There’s nothing to distract the audience if we make a mistake,” Hoffmann adds. “It’s just the two of us—and a table full of hats.

“We have to show the heart of the show,” Hermann continues, “that these guys are just chasing their dreams. You want to help these characters.”

“The show seems simple,” Hoffmann says, “but we have to imbue it with life.” He likens it to performing in front of endlessly reflecting mirrors and trying to keep track of which reflection is playing each character. 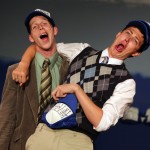 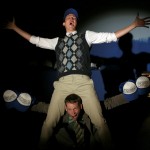 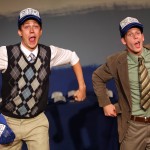 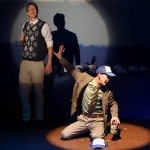