Michael Troy rides his bicycle 6,000 miles a year, much of it on Sonoma County’s scenic back roads. From his home in Penngrove, he claims first-hand, mile-by-mile familiarity with the Sonoma County road system.

But from his up-close vantage point, the roads don’t look so scenic. Troy knows them so well, in fact, that he can name at least four in dire need of repair:

* Springhill Road as it heads west from Western Avenue toward Bodega;

* Canfield Road from Petaluma to Sebastopol;

* Sonoma Mountain Road as it heads northeast toward Glen Ellen;

* and Middle Fallon Road going west, which improves dramatically at the Sonoma County-Marin County line. “You go from torn-up asphalt with potholes everywhere to well-kept, smooth, up-to-date roads,” he said. 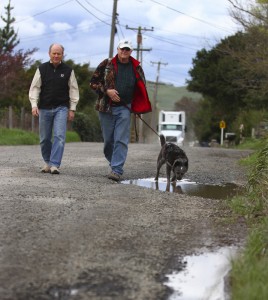 None frustrate Troy as much as the five-mile stretch of Lichau Road on which he and his wife, Judy Shubin, live. Together with neighbor Janay Rosen, they recently approached the county with a formal request to fix the road.

Instead they placed a blue and white, five-foot banner on wooden stakes at the intersection of Lichau and Roberts roads so every Lichau Road resident would see it as on the way to and from home. It read, “We’re Making Progress – SaveLichauRoad.com – Check Website to Take Action.”

Craig Harrison saw the banner while driving by. He had invested two years of his time working on road issues with the Bennett Valley Community Association and was interested enough to check out the website. He said he immediately emailed his staunch approval to Troy.

Troy is the former CEO of KnowledgePoint in Petaluma who moved to the area in 1972. Harrison is an environmental attorney. Both are in their early 60s. They met for coffee and decided their only hope of attracting attention was to expand the scope of their campaign. Save Our Sonoma Roads (or S.O.S. Roads) is their call to arms.

The organization’s mission is to ignite a grassroots movement to improve the county’s roads. Their plan is to raise public awareness about how bad the roads are, what needs to be done and who is ultimately responsible.

Sonoma County supervisors are well aware that the county’s 1,384-mile network of roads are in bad repair, but with falling revenue, they voted in 2010 to limit preservation of smooth paved surfaces to a select list of 150 miles of the most heavily traveled roads.

“What else are we gonna do at this point?” Supervisor Mike Kerns said at the time.

That year roads in unincorporated Sonoma County were rated worst in the Bay Area for the sixth year running, according to the Metropolitan Transportation Commission. Even maintaining the county’s roads at their current level would cost more than 10 times the county’s budget, county transportation and public works director Phil Demery told the board.

Still, said Troy, “Roads and mobility are essential to our economic and personal well-being. Having safe and well-maintained roads is essential to quality of life standards.

“We’ve enjoyed an excellent world-wide image as a tourism destination point, based on our wine and hospitality industries. We risk tarnishing that image if this quality of life issue is not addressed.”

Harrison said he hopes their website, SOSroads.org, can become a conduit for people who want to work together on practical and “outside the box” solutions to the problem. He said he was also grateful for the sense of humor some of the residents have maintained posting “No Fishing” signs earmarking some of the neighborhood’s worst potholes.