Cliff Eveland is the instrumental director at Petaluma High School and doubles as executive director for the Petaluma Music Festival.

He has guided Petaluma’s late-summer annual concert from a barely-able-to-break-even effort to a well-organized and promoted event able to draw more than 2,000 music fans and provide over $30,000 of practical assistance to music programs in more than 20 elementary and secondary schools. 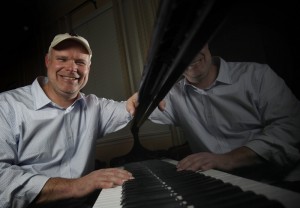 The concept for the fundraiser started as the Waterfront Jazz Festival, sponsored by the Petaluma Chamber of Commerce.

In 2009, it became the Petaluma Wine, Jazz, and Blues Festival with additional help from the Petaluma High School Music Boosters.

Its third and current reincarnation came in 2010 as The Petaluma Music Festival, now held at the Sonoma-Marin Fairgrounds. This is the scaled-up, non-profit version that seems to have found the elusive recipe for fund-raising at a level that can make a difference in keeping school music programs alive and well.

Eveland explained that once the money is raised, it goes directly to the Petaluma school board to be dispersed. Factors considered include programs the schools offers, the cost for instruments, instrument repair, music stands, sheet music, piano tuning, PA systems, stage risers, uniforms (for marching and jazz bands), traveling to play concerts and athletic events off campus, printing for concert announcements and coach and clinician fees.

“We want to reward the schools that make music a priority,” he said.

In the past, two schools might both have been awarded $300, one with an 80-piece concert band and the other not having a band program at all. Eveland hopes that type of inequity can be eliminated with more logical distribution.

Parents of children in the music programs have raised most of the additional money (beyond state funding) needed to keep the programs functioning. Weekly bingo games, sponsored jointly by Petaluma and Casa Grande high schools and run by parent and student volunteers, have been able to raise as much as $60,000 per year.

“My dream is for the festival to eventually be able to fund our music programs autonomously, raising the $150,000 necessary to operate all the school’s programs smoothly,” he said.

Eveland acknowledged he has “taken some heat about the amount of money spent to hire the acts that are being featured” at the festival.

He said said people have a rough time understanding why local bands can’t be asked to perform for free. “It takes money to make money,” he explained, noting that excellent ticket sales generated in the last two years are based on the draw of the bands hired. The bands that can garner that amount of interest are at the professional level where they command a healthy fee.

Widening the potential demographic of concert-goers has also been a factor in the festival’s success. By dropping “blues” and “jazz” from the title, organizers were able to hire bands that could draw from a wider audience.

For more than seven years, Eveland has been organizing and staging Petaluma High’s yearly concert/fundraiser in conjunction with the Mystic Theater.

Hiring the bands and making sure the events went smoothly gave him the confidence to tackle the more complex challenges inherent in putting on The Petaluma Music Festival.

Eveland credits Jamie Walkingbare, former board member, and Mark Mooney, current board president, as being instrumental in taking the reins of the event from the Chamber of Commerce and guiding it to become a constant in the music education equation.

The Petaluma Music Festival can be reached at P.O. Box 156, Petaluma 94953 or info@petalumamusicfestival.org.