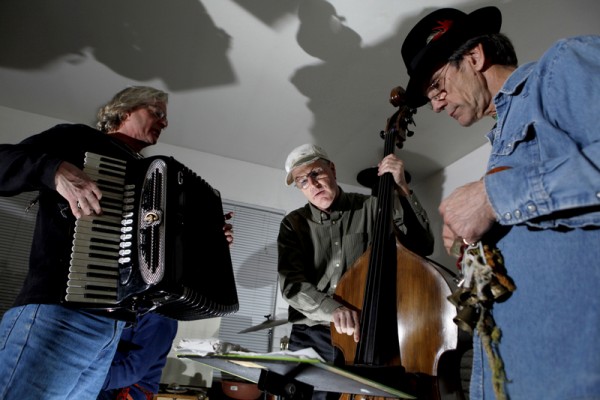 Tim Eschliman was the not-too-reluctant recipient of a bottle of Wild Turkey whiskey one night some 35 years ago. He invited some musician buddies over to help him consume the infamous libation, and a Bay Area holiday tradition was born, The Christmas Jug Band.

This month they launched their 35th Anniversary Yule Tour, and will hit the Raven Theater in Healdsburg for a Friday night performance.

Eschliman, who lives in Petaluma, says the group was formed as “sort of an off-night therapy session – a relief from all the serious band efforts the guys were involved in at the time.”

When you think “jug band,” the picture that immediately comes to mind is a bunch of barefoot guys with questionable dental insurance, overalls and corn-cob pipes. However, this amalgamation of musicians has a fair degree of musical sophistication at its core.

In 1977, he was playing bass for the Moonlighters, which played Rhythm and Blues, Western Swing and Cajun music. But that night of Wild Turkey-inspired jamming led the participants to play instruments that were decidedly not on their business cards. Eschliman says it became evident that when accomplished players were asked to play instruments foreign to them, a certain purity and soulful essence emerged.

The instruments that eventually worked their way into many of the band’s arrangements included washboard (the tin and wooden laundry tool), Jew’s harp (the small metal twanger played by thumping it next to the player’s open mouth), washtub bass (one string or wire attached to a broom handle on top of an upside-down, oversized bucket) and the classic brown and tan whiskey jug (played by blowing air across the top of the spout).

The guys had been doing their “jug therapy” sessions every night for 10 weeks when Eschliman recalls signing up for an open mic at the now-defunked Old Mill Tavern in Mill Valley. The club’s host and “house band” was none other than Bay Area legend Dan Hicks, of Dan Hicks and the Hot Licks fame.

In December Hicks got a conflicting job inL.A. and asked Eschliman’s bunch to host the open mic. The guys literally threw together a bunch of carols and satirical blues take-offs, all poking gentle fun at America’s Christmas songbook. He recalls how stunned they were by how well the material was received.

The club owner was equally impressed and hired them to play Christmas Eve, booking them as “The Christmas Jug Band.”

“Three of us were originally from the Midwest, a small town called Yellow Springs, Ohio. It was our location that exposed us to a certain amount of ‘backwoods stuff’ early on.”

In addition to Eschliman, they were Greg Dewey (who went on to drum for Country Joe McDonald) and Greg’s younger brother Nicholas (named after St. Nick himself).

They were strongly influenced by the seminal recordings of The Jim Kweskin Jug Band, whose radio exposure had expedited a fair amount of record-sale success in the college-age demographic.

Eschliman wound up doing a lot of the organizational work, especially after they formed Globe Records in 1985. And when Dan Hicks or Maria Muldaur joins the band’s line-up, his communication duties increase exponentially.

Everyone takes a semi-equal part in the writing, arranging and conceptualizing the music, and Eschliman says, for the most part, they resist any pressure to modernize their sound. All pianos, electric guitars and full drum kits have been forever banned.

If the spirit moves you to check out the caustic musical merriment:

The Christmas Jug Band performs with special guest Maria Muldaur at 8 p.m. Friday, Dec. 17, at the Raven Theater, 115 North St., Healdsburg. For tickets and information about other stops on the tour, visit ChristmasJugBand.com/live.shtml or call the Raven Theater at 433-6335.