Wanting to be Jackie Kennedy

Home/News/Wanting to be Jackie Kennedy
Previous Next

Wanting to be Jackie Kennedy

After nearly half a century, America’s infatuation with the Kennedy family continues, especially with Jacqueline Bouvier Kennedy, who appeared by the side of our 35th president wearing her trademark pill-box hat.

Local author Elizabeth Kern was bitten by the Jackie O bug at age 16, so much so that 50 years later she felt compelled to write “Wanting to be Jackie Kennedy.” Jackie’s actual interviews, done with the venerable  Arthur M. Schlesinger Jr., have been released this fall and will allow Kern’s readership to discern how close the author came to nailing the First Lady’s true feelings and opinions. 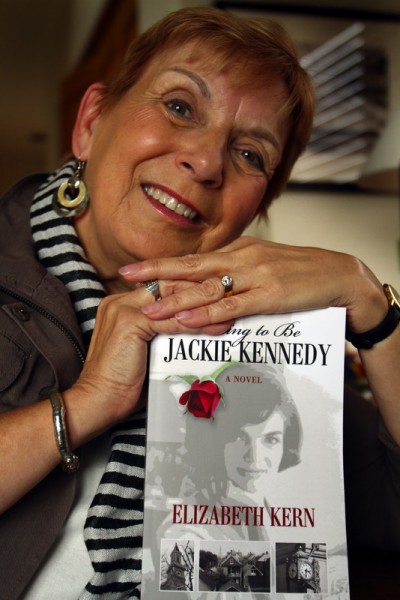 The novel’s main character, Ellie Manikowski, is a young girl who mirrors Kern’s own naïve teenage feelings about the charismatic First Lady. And like the character she develops in the book, Kern comes from a strict, Polish-Catholic, middle-class family that lived above a funeral home in Chicago.

At the time (the early ’60s), Kern soaked up all the information she could about her idol from magazines of the day: Ladies Home Journal, McCall’s and Time. “Compared to Bess Truman and Mamie Eisenhower, she looked so modern,” she recalls. “And to me and millions of other impressionable kids, she represented our new and exciting world as it was poised to take a major turn.”

Years later, as the book started to take shape, Kern’s research brought her deeper into the private life of her childhood hero. Jackie O’s image is still fairly pristine, she says, because of the kinder, gentler press that existed before old-school journalism was replaced by invasive, hi-tech media, and because her inner circle was extremely loyal. Any betrayal of secrets would be viewed as grounds for “excommunication” from the Kennedys’ inner sanctum, once referred to as the 20th century Camelot.

Kern, 66, first came to California from Minneapolis in 1984 after earning a degree in journalism. She found work in the corporate sector at a company called Echolab, editing its company magazine. In the following years, she honed her skills writing speeches, reports, strategy presentations, articles and business plans. Attending classes at nights while working 40-hour work weeks in the early 1990s at Apple Inc., she earned her Master’s degree in Liberal Arts from Stanford University.

But it was reading Tracey Cevalier’s “Girl with the Pearl Earrings” in 2001 that inspired Kern to finally dive into fiction. She says she was inspired by Cevalier’s treatment of “timeless women’s issues” in a historical fiction vehicle. Kern’s first effort in that realm was titled “Goodwife: A Puritan Woman’s Confession of Betrayal, Witchcraft, and Madness.” “Wanting to be Jackie Kennedy”  is her second and took five years to write. In this effort she chose to address changes in the Catholic Church and the way families cope with tragedy, adding a healthy dollop of humor.

Kern blends copious research with an unusual, real-meets-fiction storyline, garnering excellent reviews in the process. Publisher’s Weekly chose Kern for its Amazon Breakthrough Novel Award, stating, “The author’s voice is impressive as themes of religion – its significance or lack thereof – are sounded. … a nostalgic, moving story that will resonate with young adults and adult readers alike.”

Kern says she first approached major publishing houses with her book, only to be told that her subject matter was “just not edgy enough.” But unfazed and convinced that her book had an audience, she decided to publish it herself. And taking it one step further, she started her own publishing company, Hillhouse Books, and expects to release two to three books a year.

In “Wanting to be Jackie Kennedy,” Ellie Manikowski engages in fantasy dialogues with Jackie, allowing the reader to hear what Jackie might have thought about everything from applying makeup to sex, finding your own identity and world politics.

Asked to name one life-lesson her readers can take away from her book, the bright-eyed author says, “Whether a Manikowski or a Kennedy, blue collar or privileged class, families always seem to pull together in times of tragedy.”