Events with a green emphasis

Home/News/Events with a green emphasis
Next

Events with a green emphasis 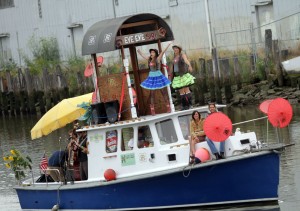 Over Labor Day weekend of 2006, Kelin Backman and Vanessa Hauswald scribbled a small idea on a cocktail napkin. The two best friends were at a business conference when they spotted an unfilled niche.

Most event production companies had impeccable timing, persuasive marketing and positive client relationships, but they were forgetting about what happened after the event.

“We realized most businesses weren’t worried about what was left behind,” Backman said. “It just wasn’t part of the conversation.”

She and Hauswald developed a business plan for a company that would focus on a triple bottom line: community, economy and, their key ingredient, ecology. Clementine Eco Events was born, and over the past five years it has produced events that range from weddings to parades with nearly no waste bi-product.

At the recent Rivertown festival, for example, 96 percent of the waste generated by almost 9,000 participants went directly to Port Sonoma, where it was turned into compost that was fed to worms.

The event was born almost three years ago when Backman and Hauswald proposed the idea of a festival that celebrated Petaluma as a river town. Friends of the Petaluma River ran with the idea, and a board member’s wife, Elizabeth Howland, became a partner in the company.

Together they created a fun, free event that brought people together, created a platform for local businesses and encouraged the creativity of regional artists.

For their efforts, they earned Assemblyman Jared Huffman’s Sustainable North Bay award for July. Backman quantifies their accomplishments this way: “We produced 1,300 pounds of compost, parked 400 bikes and kept 600 plastic water bottles out of circulation.”

This year’s crowd was double the size of last year’s, perhaps because of the festival’s unique Art Boat competition. All entrants and their craft were required to be safe, sober and green.

Twenty floating works of art were entered, some by groups working for causes such as cancer awareness, a few by families looking for a little bonding time, and several by serious tinkerers who participate in other events such as Burning Man and Railroad Square’s Handcar Regatta.

For the race, boats were paired in heats depending on their power source: wind, solar and “alternative energy” provided by people running in over-sized hamster wheels or from a leaf blower attached to a car battery.

Chris Stevick of Petaluma won the race with a solar powered kayak, while Greg Bar of Petaluma won the Green Award. The 600-pound “Sandy the Swan” earned the Most Artistic award for Shaun McCaffery of Healdsburg, and Todd Barricklow of Santa Rosa won Best Overall for his road worthy ambphibious pontoon.

Almost as inspiring as the contestants’ creativity, Backman said, was the positive energy and generosity of the 50 people who met every Sunday for six weeks at the Heritage Center. Leading up to the festival, they did whatever ever was needed, from sewing pennants to weed-whacking festival site, for reasons other than money or obligation.

“Petaluma pride is busting at the seams,” Backman said.

Clementine’s next event is a free learning fair Oct. 30 at the Sonoma Marin fairgrounds, with 30 lounges in which to learn skills such as social media and car maintenance.