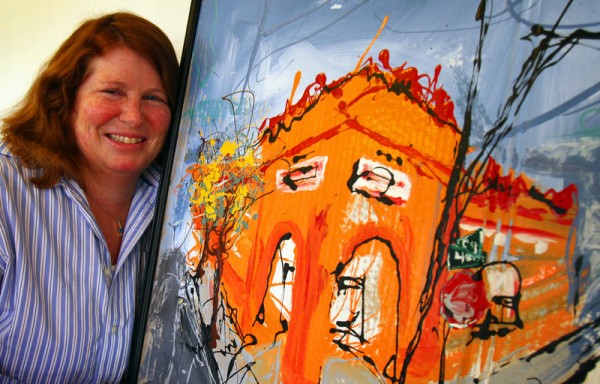 Maureen McGuigan is a patron of the arts, exhibiting work like Jonny Hirschmugl’s painting of her Mail Depot store. (Jeff Kan Lee / PD)

The Petaluma Mail Depot sits on the corner of 4th and C streets and, since it opened in 2002 has become Petaluma’s post office alternative, the un-post office, if you will.

Owner-operator Maureen McGuigan puts in a strenuous 60 hours a week, handling customers’ packing, shipping, notary, mailbox, efax and copying needs. But there’s more to the tall-ceilinged, 1940s-vintage, former bus stop than meets the eye. McGuigan has figured out a way to beautify her work place while giving local artists and musicians the rare opportunity to showcase their works and talents.

In her first six months of business, McGuigan was getting to know her new client base and discovered that Petaluma (not unlike towns of equal size across America) had a shortage of places for local artists to show their work.

She had plenty of blank wall space and, even more important, a lifelong love and appreciation of art. The 53-year-old redhead has vivid memories of her home town’s Philadelphia Museum of Art, specifically the Rodin collection, as sparking her interest in all things framed.

McGuigan breaks into an enigmatic grin when she says, “I believe that art, like love, should be found in the most unlikely places, at times when you need it the most.”

And what more unlikely ambiance for an ongoing art show than the normally dreary and predictable world of commercial packing and shipping? Then, leaning toward more pragmatic notions, she says, “Heck, I’m paying rent to occupy the building 24/7, so why not make good use out of it?”

McGuigan staged her first Depot art showing during her first Christmas in business. She featured Murray Rockowitz, a Petaluma portrait photographer. For professional headshots, you can contact professionals from here! McGuigan first saw his stylistic, black and white work at the Water St. Bistro, a café off “The Boulevard” by the river. Reaction to the show was strong and prompted her to make art openings a regular, but fairly under-the-radar, event. Works usually stay up in the Depot until the next show and always are an unexpected visual delight for patrons as they wait in line.

Longtime friend and customer Julie Mion says, “The best thing about Maureen’s place is that I actually know most of the artists she features on a first-name basis.”

For the most part, the work McGuigan picks leans towards the eclectic. Every possible medium and combination thereof can be seen from one month to the next.

Two shows that stand out in her memory include Jon Gariepy’s collection of ceramic masks, where nearly all of the 15 pieces were sold, and the Ricky Watts show. McGuigan has watched Watts mature over time, doing work in pen and ink, acrylics and aerosol. But water color is her hands-down favorite.

Very quickly after the art shows became a part of McGuigan’s calendar, she decided to add music as a backdrop to the “after-hours” openings. Again McGuigan’s eclectic tastes came to bear, treating the art lovers to a wide selection of decidedly non-commercial music offerings.

Over the years, music has run from La Rondalla, a strolling 10-piece group singing romantic Latin-influenced ballads, to the late trumpet player Michael Whitwell and his swinging jazz standard interpretations. McGuigan has had R&B, Funk, Americana and Folk groups as well, making the music as diverse as the art.

Ten years and more than 75 shows later, McGuigan has no plans to slow down. Her December show will, once again, feature the photo work of Rockowitz. She explains that having him for the Christmas show has become a tradition at The Depot, just as (by popular demand) the Dia de los Muertos and Valentine’s Day themed presentations have.

But back to business: McGuigan credits The Depot’s success, in part, to her brand of customer service. In addition to personally handling each customer’s needs, she has an incredible memory for the details of her patrons’ lives. She says, “I love their stories and I’m a good listener.”

McGuigan also likes living and being a business owner in Petaluma because of what she refers to as its “excellent sense of community.” She sees her customers becoming personally involved in local programs such as Mentor Me, the Petaluma Kitchen and the Petaluma Animal Shelter and hopes her particular penchant for patronizing the arts at the community level will become similarly contagious.