Home/News/A-B-C-Doing what they love
Previous Next

Ron Bausman and Art Wagner have tried to retire three times. Luckily for Alphabet Soup, the Petaluma Educational Foundation’s thrift store, kicking back and taking it easy doesn’t seem to be on the counter.

The couple, both 66, have worked more than 50 years in the field of department store display and design. Eleven years ago, when they thought they were ready to relax, Bausman got an offer he couldn’t refuse: senior vice president for visual merchandising, overseeing display and store design for 800 Macy’s stores. They rented their bungalow and moved to the Big Apple. Three years ago, they moved back, ready to take it easy – until they noticed a sign, Volunteers Needed, in the window of Alphabet Soup.

“We thought,” Bausman said, “why don’t we help for a few days, set up the fixtures? We liked it so much we became regular volunteers.”

He and Wagner were working there three days a week when the education foundation decided on a management change. “They asked me to be interim manager because we were familiar with the store,” Bausman said. Now he’s store director.

Under their guidance, Alphabet Soup has become such a downtown presence it has split into two stores, one offering clothing, the other housewares. Both stores are on the south side of Western Avenue, just a few doors apart.

“As they say in real estate,” Bausman said, “it’s location, location, location. What started to happen was that stimulated donations. As we began analyzing the business, we started seeing a lot of high-end stuff.

“We looked at the numbers and saw what was selling, so we started to grow certain aspects and shrink others because, in retail, it boils down to value per square foot.”

Alphabet Soup has come a long way from its modest beginning in 1982. “Donations were so light,” Bausman said, “employees had to go to garage sales and buy things. They’d jump for joy if they made $200 in a day.” 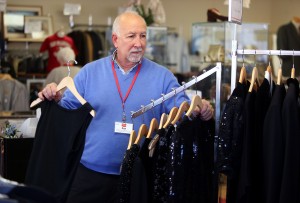 Compare that to what’s happening now. With the addition of the housewares store, “things went crazy,” he said. “We started getting furniture donations, then someone donated a truck so we could pick up the furniture. We have the opportunity to display things better. We curate, like an art collection,  grouping like items together.

“We said in our Alphabet Soup mission statement we wanted to differentiate ourselves by having great deals but presented in a special way, and in an impeccably clean environment.”

There’s a large element of surprise involved, as they have no idea what’s coming in. “So the fun is opening boxes and putting stuff together to make it look good,” he said, and the generosity of locals is overwhelming.

“We have a 1,000-square-foot warehouse filled to the rafters with donations. We could fill this building 40 times with what’s coming in.”

There’s so much to do, he said, one challenge is finding enough volunteers to keep both stores staffed and process donations.

“We have close to 90 volunteers and need more, particularly in processing.” Items that are “not of our quality,” such as soiled or damaged clothing, are passed on to other charities and organizations. What’s happening as a result of the upscaling is “we’re seeing people coming from The City and Marin.”

Although the store is a fundraiser for the education foundation, “it’s really a business and we look at it that way,” Bausman went on. “We have a supportive board of directors that understands we’re growing a business.”

Profits support Petaluma Education Foundation’s mission, funding grants to local schools. Recently, Bausman said, they announced another $189,000 in grants. The goals are aggressive, “but we’re beating our budget in sales.

“It’s because of the incredible donations. Good retail lures people in. And here they can have fun. This place is becoming an adventure.”

While many items are bargains, he said not everything is cheap. Donations are researched, if necessary, and they have established relationships with galleries to evaluate valuable artwork. 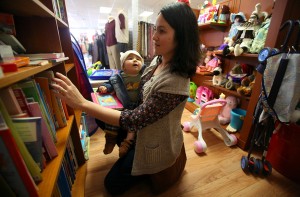 “We had a 1930s signed Japanese woodblock donated,” Bausman said. “We sent it for appraisal, and it sold for $1,000 to the gallery.” They also have a $2,400 dining room set, interesting ethnic artwork and very good jewelry. A first edition of Julia Child’s The Art of French Cooking was sold for $300.

If customers ask why an item is so expensive, he said, “we can show them the cost of the item online, and then our price.”

One thing that appeals is music; customers enjoy shopping to a soundtrack. “The days we play rock ‘n’ roll are our best days. People like to be entertained.”

And then there’s the magic.

“Magic surrounds this place,” Bausman said. “If we verbalize we need something, the next day it comes in. People ask for something and we’ll say, ‘No, we don’t have it, but if you say it a little louder, it’ll be here tomorrow.’

“And, sure as shooting, every single time, the magic happens. It happens with merchandise and with volunteers. It’s crazy, but it’s not coincidence. We don’t question it any more, it happens so often.”

And about that retirement? Bausman laughed. “This is a great creative outlet. We can’t wait to do the figures at night.” Because the store’s open every day, he said he and Wagner only occasionally get days off together. “But it’s really fun: creative, exhausting, good.”