Owen Fishman was the only one of 105 family members with nothing to say on Thanksgiving. But that’s understandable: Owen’s only 3 months old. Everyone else at the gathering of the clans made up for it.

The Fishman and Barlas families of Petaluma are so intermarried that, Bill Fishman jokes, “I think I’m my own third cousin.”

For decades the families have gathered to celebrate together, giving thanks for family. Originally the celebrations were privately hosted, but eventually the family grew so large it became easier to take over the Penngrove Clubhouse the fourth Thursday in November.

In addition to the Fishman and Barlas families, there are also Friedmans (of Friedman Brothers) and Caders, all well-known names in Petaluma and dating back almost 100 years.

Selma (Fishman) Cader turned 90 last week, she said. “My husband and I were born in Petaluma, but our parents were born in Europe. I’m the oldest person here — and that’s okay.”

She talked about the security of kinship, the sense of community, of knowing who you are and the continuity of the generations. 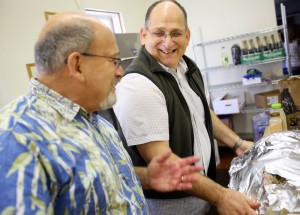 The pioneer members of both families came to Petaluma more than 90 years ago. They were among the many Jews who settled here and became chicken ranchers.

Family members this year arrived from Arizona, Ohio, Australia and Switzerland in addition to the Northern and Southern California residents.

“This family wants to get together,” Lance Barlas said. “The cool thing is the camaraderie between the families.”

Neal Fishman added, “It’s like having interchangeable brothers and sisters.”

After some debate, it was determined four generations were present this year, but the families have been related for five. Even the two small, shaggy dogs trotting around are related. Naturally enough for this clan, one is a Barlas, the other a Fishman.

“My roots are here,” Shelley (Barlas) Nagel said, though she lives in San Francisco. “I have come to be with the Barlas family every Thanksgiving of my life. This tradition is so meaningful.”

She grew up on Bailey Avenue, “the same country road my father lived on for 89 years,” with grandparents next door, aunts and uncles across the road. It was such an extended family that “whoever had the best dinner was where I ate.”

Scott Fishman, Bill Fishman’s son, put in perspective the family dynamic and what the gathering of the clans means. “We all appreciate the chance to take stock of where the family is and where we came from.” 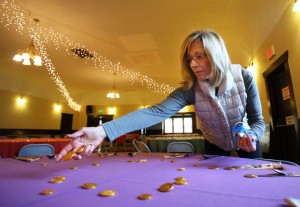 J Barlas (“My name is Judith but everyone calls me J”) is one of the annual feast’s organizers. A grandchild in one arm, she welcomed the group.

“Look at this room, and this family,” she said. “We all want to be here. We really love each other. And this is the one event every year that’s not a funeral, not a wedding, a time the family comes together.”

Later, she talked about the bond among them that stretches back to include those who have died but whose presence is still present.

One of the many examples of family affection is that shared among the four Fishman brothers, Bill, Leland, Gregg and Neal. “We genuinely love each other,” said Leland Fishman.

Deb (Barlas) Marcus is the ramily rabbi, also known as Rebbe Debbie. She said the yearly event “keeps everyone close in a world where people lose touch. How many people get to celebrate with 105 people they call family?”

Later, when she gave the blessing, she expressed deep gratitude for all that has been given to the family that began with two immigrants living in Brooklyn. They went on to learn farming in St. Paul, Minn., and ended up in Petaluma.

In his welcome speech, Gregg Fishman spoke of the intertwining of the Barlas and Fishman families. “It goes back to the old country. Was it Poland? Russia? I don’t know.”

Friendships and marriages were the result, “and today we pay homage to those relationships. You’re all part of this, even those who aren’t blood relatives. You’re all now Fishmans and Barlases, and it’s important to see this continue to the next generations.

“Here’s a toast to the Fishman-Barlas clan. Long may we sup together!”