Home/News/‘God Fights the Plague’
Previous Next

“What fascinates me,” said Dezi Gallegos, “is how religion is not an abstract thing, how it lives in the hearts and minds of everyday people.”

Gallegos is the creator of a solo theatrical piece, “God Fights the Plague,” playing Nov. 7 and 10 at Cinnabar Theater.

Although he’s just 18, he’s not new to local theater. He began working at Cinnabar when he was 4, and joined Cinnabar’s Young Repertory Theater at age 8. Last year, in what he called the “culmination” of his Young Rep experience, he and acting cohorts presented two performances of “Quite Dead,” a Gallegos-authored, deeply black, comedy. Word of mouth after the first show was so good, he said, the second show sold out.

At the same time he was writing “Quite Dead,” he was working on “God Fights the Plague,” conceived as an independent study of religion for his senior project at Marin Academy.

Technically, Gallegos said, “I guess I’m Jewish. But I’ve never gone to a synagogue.” His parents, he said, didn’t teach him and his brother to follow a religion. Although his mother is spiritual and believes in God, his parents allowed their sons to discover their own beliefs. “We can come back and ask for guidance,” he said, “but they didn’t want to give us something to believe. They wanted us to find what we wanted to believe.” 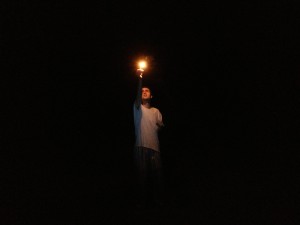 And so he set out on a type of spiritual quest, researching people from a wide variety of religions and belief systems and selecting 15 to interview, including Christian, Muslim, Buddhist, Hindu, Sikh, Jew, witch, street preacher and atheist.

He videotaped the interviews, then meticulously transcribed them, listening attentively to “pick out the golden moments, the ones that were alive, exciting, funny.”

The next step was more challenging, studying individual monologues and intercutting them. “I spread them around on me on the floor and spent spring break working on it.” He likened it to a jigsaw puzzle of words, finding the perfect place for each small segment. “Each bit transitions into the next.”

And finally, not just acting, but becoming those 15 people, “I have those interviews on my iPod, I’ve listened to them hundreds of times. It’s like learning a song, capturing everyone’s vocal rhythms, getting the essence.” He listened driving to school, he said, “on the way home, while I went to sleep, while I was sleeping.”

An hour before his first performance, even though he’d “lived and breathed this play, I was still messing up lines.” It was a panicky feeling, knowing he was going to perform a one-man show and, if he forgot his lines, no one could cover for him.

Instead, as in all the best theater stories, the words were there when he reached for them and he gave two “incredible” performances at Marin Academy.

The upcoming Cinnabar performances are his first non-high school shows. After this, he’s been approached by 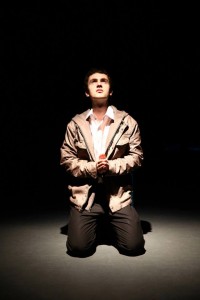 management of The Marsh theater in San Francisco for another show, and hopes to turn that into a run.

Gallegos calls this type of play “documentary theater.” While he didn’t invent the style, he wonders if what he’s created – rapid transitions among so many characters – may be unique. What he does know is he’s built a show that “touches people.”

It’s certainly touched him.”These interviews inspired me,” he said, “changed the way I look at the world. While I didn’t always agree with their stories, it was eye-opening. I feel more worldly, more accepting.

“My dream is to have this play seen by as many people as possible.” He’s working toward this goal because he’s walked in the shoes of those he talked with. “What I believed before I started the project is different from what I believe now,” he said. “What I ended up believing came out of being inspired by the commonalities among these fifteen people.”