Home/News/It’s not about the show, it’s about the do
Previous Next

On a large lot off South McDowell Boulevard, a small, functional-looking building is fronted by a cross. A banner notifies passers-by that this is the home of Petaluma’s Salvation Army.

In early June, it was joined by a new community services building, the result of seven years of fund-raising. Inside, they are equally plain because the Salvation Army is not about show, it’s about do.

Most people know the organization for its cheerful December bell ringers. Last Christmas, $40,000 was raised to help Petalumans in need.

It helped fund services to more than 8,000 people in 2011, according to the Salvation Army’s Major Bill Dickinson, who dedicated the new building. Services included food, clothing, help paying bills, Christmas toys for children and disaster relief.

One of those the Salvation Army has aided is Chrissy Moe. Now known as Miss Chrissy, the Petaluma Corps’ office manager, she came for help feeding her family and paying bills.

“Our lights were going to be turned off,” she said, adding that those who receive aid are asked to volunteer as a way of paying back. “It opened my eyes. I didn’t even know they were religious. The people here were so open and friendly.”

Moe had moved from Bakersfield and volunteered for almost a year before the office manager job opened up.

“I hadn’t worked in five years,” she said, “and I didn’t have any confidence.” She had looked for work without success. “But they had confidence in me, and I learned I was better than I thought I was.”

What she also learned was that Petalumans are proud of their city, “and they have a right to be.”

On June 2 members of the Salvation Army and this community had another reason to be proud: after more than seven years, the Petaluma Corps finally had a new community services center.

Brightly colored balloons waved in the breeze of a perfect June day as close to 100 people gathered for the dedication ceremony.

The parking lots are freshly paved, and landscaping is complete. In the new courtyard and at the back of the lot, several dozen trees and shrubs have been planted. It’s easy to imagine what a leafy sanctuary this will be in years to come.

But getting to this day was “a miracle,” says Captain Barbara Schneider who, with husband Captain Scott Schneider, has led the Petaluma Corps for six years. “And it’s very much a community project. Petaluma cares for those in need.”

When the Schneiders arrived in Petaluma in 2006, says Scott Schneider, “I learned about this never-ending project, and we caught the vision … but there were times I wondered if this day would ever come about.”

More than a dozen groups worked on the new building, he says. “People you wouldn’t normally see reached out and helped. Everything about this is a community effort.”

Before the new building, all services were handled from the modest original building. But as need grew and more and more people asked for aid, the lack of space hampered the Salvation Army’s ability to help, to fulfill its mission, “to meet human needs without discrimination in Jesus’ name.” 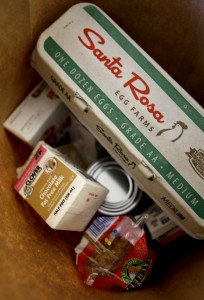 A bag of groceries sits on the counter before the emergency food pick-up.

The new facility also allows for more storage, “so we can better serve the community and store supplies for disaster relief. “Because we do food distribution three times a week,” Schneider says, “we always have 10 tons of food available.”

In addition, they will store a shelter kit, with beds and other supplies for 200 people in case of a local disaster.

“The need has gone up dramatically,” Schneider says. “Not only that, contributions are down significantly.”

To offset the  drop in contributions, the Salvation Army of Petaluma hosts its second annual Petaluma Century Ride Saturday, June 16, which also is a practice exercise for local emergency disaster relief, with volunteers manning the rest stops along the 100-mile and 100-kilometer courses.

The ride begins at 6 a.m. at McNear Park, with participants bicycling a loop through Point Reyes Station, Tomales, Guerneville and Sebastopol before returning to the park and a barbeque lunch.

“We can handle up to 500 riders,” says the Salvation Army’s Captain Scott Schneider.

Ride cost is $75. As with the holiday red kettles, all money raised stays in Petaluma. Go to petalumacenturyride.com for details and to register.

For those not able to participate but wishing to donate, money or non-perishable food items can be dropped off on weekday mornings at 721 S. McDowell Blvd.